- affordable comfort for your business or city trip!

we spin for you!
- the somewhat different
hotel in linz

we travel a lot, like you. and at luxury hotels we asked ourselves: why is it always so cumbersome? and why do you usually pay more than it's worth? 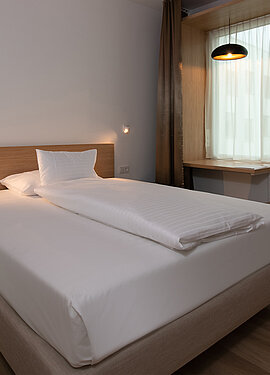 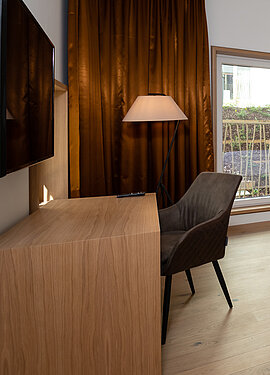 lean luxury is our philosophy.

For us, luxury means uncomplicated comfort instead of formalities. inspiring people instead of expensive facades. soul and character instead of high-gloss surfaces. no expensive prestige addresses, but rather where the real heart of the city beats. only then does it feel right and good to us. rather corners and edges than slippery, rather casual than styled, rather laugh out loud than softly blaspheme, rather casual than stiff. urban individuality, innovative design and dynamic young architecture offer you a “spinning hotel experience” for all your senses.

For us , lean means not having to pay anything that you don't need or want. Simply leave out the unimportant, very consistently. In our hotel we don't need a reception, a continuously open restaurant and no room service. for this we want a casual bar and an uncomplicated restaurant. affordable comfort - inexpensive & cheap!

clever & smart. we don't need a huge room because luxury can also be achieved in a small space. luxury yachts are our role model. But we want everything to have its place and that the most important things work perfectly: be connected, sleep, freshen up. we consistently use the latest information technology where it makes sense. we offer you super-fast wifi - free of charge throughout the hotel. you check your room online yourself and you can choose exactly which one, all online. With smart e technology, there is no longer any annoying queuing at check-in and especially at check-out. you can do all of this from home or on the go.

the public parking garage under the design hotel offers you a comfortable journey with your car. the lift takes you directly to the ground floor of the spinnerei design hotel.

you don't need any more cash. the room is paid for in advance and you can print out your bill according to your wishes. you can pay for the garage easily with your debit or credit card. no annoying searching for change. we are the first cashless and paperless hotel in upper austria.

"We live safe hospitality" compliance with safety and hygiene measures is important to us and also that our employees are regularly tested for the covid-19 virus. For a safe relationship in everyday hotel life - "keep on smiling"!

make it your own story

make the most of your stay! feel the high-quality materials in the room, the real wood parquet, the innovative design of the walls and tables. connect to our super fast wifi and let go of all the stress. then you have arrived at the spinnerei designhotel linz.

move into your world - your room

hang up your clothes and stow your suitcase under the slightly raised bed. getting up is easier ... lean back and enjoy the large hd flat screen tv in your room.

benefit from the location
when you explore the city - by tram or maybe soon with a gondola.

on the 1st and 3rd floors you will find ...
a drinks machine and an ironing station in case your clothes are crumpled in your suitcase, which you need for a business appointment.

go
to the aperitiv bar “vista giardino” or the mediterranean restaurant “da giulio” and discover all the little details that our design hotel tells. have a sundowner in the garden, where you can find quiet corners between plants and art.

and if you want to throw a party
, we also have a large event terrace with a cool rooftop bar for you to rent. We also have a separate room for your meeting, of course with the necessary technology, daylight and access to the garden.

after such a long day - snuggle up in bed,
feel the sheet, the oversized blankets and the high-quality bed features and look forward to a great breakfast buffet made of regional and high-quality products.

to put it very modestly: we love our rooms. Here you will find everything you need, we have simply left out the unnecessary. Like you, we travel a lot and we know how important a large box-spring bed and a refreshing, spacious shower are - alone, but especially as a couple.

you can expect high levels of comfort and few frills.

sweet dreams
too often we slept in uncomfortable beds that were too short or simply uncomfortable. we want you to wake up with a smile. for this we have invested in large box spring beds with luxurious mattresses with large, hypoallergenic duvets and super soft bed linen.

if it gets a bit hotter and louder,
our high-quality sound insulation works and the whisper-quiet air conditioning cools you down. and if you want to sleep longer, hang the dont disturb sign on the door - and nothing stands in the way of a restful sleep.

what
else you can expect for entertainment there is also a large hd flat screen tv. For us it goes without saying that the wifi is not only super fast, but also free of charge.

find the ideal room for you.

Here you can find out how to book or move into a room
without a telephone / reception and also inexpensive - works.

booking
very easy and fast, book a room in the spinning design hotel in just a few steps. simply click on "book", select the date and book directly and pay directly on your mobile device. the room will be charged 48 hours before arrival. You will receive your invoice and all other information about your stay by e-mail. You can pay for the garage conveniently on site with your debit or credit card.

digital check-in
on site, a self-check-in counter is available for you. no waiting time and just a few steps to the room key. simply enter the booking number and follow the instructions on the display. your mobile phone becomes your room key.

rooms
the modern and casually designed rooms are opened with the key card from the self-check-in "ariane". every room has free high-speed wifi for relaxed work and smart tv for netflixen, YouTube, amazon prime or just old-fashioned television.

quick check-out
the rooms are available until 11 a.m. on the day of departure. Check out quickly and in a smart way with your smartphone at the counter in the lobby.

the hotel has a long history:

sHON Since 1481 there has been a house at the current location that BECAME an inn from 1580. AMONG CHANGING OWNERS IT WAS THE meeting place in ebelsberg. In 1912 it was converted into a hotel, which unfortunately was completely destroyed in a major fire in 1979. newly built, according to plans by the then very well-known architect perotti, the former owner went bankrupt in 1986.

linz textil ag, founded as a small munich cotton spinning mill since 1838 and is today the oldest still existing industrial company in linz, acquired the hotel AND initially operated it itself. BUT shortly afterwards it leased it to the well-known hotelier helmut lackinger. In 2005 the business was stopped due to inefficiency AND THE HOTEL was a sleeping beauty until 2015.
in august 2015, the then board member dr. dionys lehner to the operators of the hotel am domplatz with the idea of ​​kissing this "princess" awake. after a lot of “spinning” and after a lot of meetings, the decision was made to follow the idea with action. after the owner of the immobile is a spinning mill and it quickly became clear what name the house will have:

together with the team of architects from architekturbüro1 and the two operators, eduard altendorfer and rinaldo bortoli, we have been “spinning” for the coming guests since that time in order to inspire them with a completely new style of hotel business in linz. the district of ebelsberg is also located in the up-and-coming part in the south of linz. this is where the “new” linz will emerge over the next few years with a myriad of new and innovative projects. maybe a cable car will then take guests to the center of the city.

in any case we keep spinning for you ...

our partner hotel : hotel am domplatz - an oasis of calm in the heart of linz
unique, small, personally managed, charming and also the first adult hotel in the region!
the unique central location at the Marian Cathedral, the top equipment and the exclusive design make the 4 * hotel an ideal place to stay for business guests and city or culture travelers.  Reservations under: +43 (0) 732 7733000, info@hotelamdomplatz.at, stifterstraße 4, 4020 linz / austria, www.hotelamdomplatz.at